What a difference a year makes – from fighting Walmart to running for City Council!

A year ago I was at the Poquoson Seafood Festival buying crafts and working at the “No Walmart” booth because it was a cause I felt passionately about.  I spent hours researching what happened to towns our size after Walmart came in (devastating results), went door to door talking to citizens and getting petitions signed (overwhelmingly citizens didn’t want a Walmart), speaking numerous times before City Council, the EDA, and the Planning Commission to convey what I had found, and putting out signs in our town to express how we felt.  At the time, running for City Council was the farthest thing from my mind.  All I knew was that if we, the citizens, didn’t speak up and do something, the face of Poquoson, the town we love, would forever be changed and I couldn’t sit by and watch that happen.  So, I and many others went to work!

Well, all the hard work done by myself and other citizens of Poquoson, who weren’t willing to sit by and watch a developer put Walmart at the gateway to our community, paid off.  We don’t have a Walmart.  That is no small feat, and shows just how much our citizens care about our town!!  In the months following, I had several people, some in city elected positions, some citizens, and some family and friends, encourage me to run for City Council since Traci-Dale Crawford, the representative in my district, wasn’t running for re-election.  Me, on City Council?  Honestly, I wasn’t sure.  But, after months of thought, and lots of encouragement, I decided YES, I do have something to offer the city I love!

So, now, a year later, I was once again at the Poquoson Seafood Festival buying crafts and there are signs, but they aren’t about Walmart, they are about electing JANA ANDREWS to be your representative on City Council.  The one thing I can guarantee, is that I will work as hard as a City Council representative as I did a year ago as a citizen to stop Walmart.  Whether you agree with my position on Walmart or not, what matters is that when I believe in something, I don’t know any other way than to give 110%.  And, I believe in Poquoson and I believe in our citizens!  I believe we have a special place here and want to make sure that as we grow and change we don’t lose the things that make us what we are:  great schools, a safe community, wonderful city employees, nature and wildlife, and our small town feel.  I want to be an advocate for citizens and what they want for our town just like I did a year ago.

So, I hope that you will trust me with your vote on November 8th and VOTE JANA ANDREWS for Poquoson City Council!  I want to work hard for YOU!!! 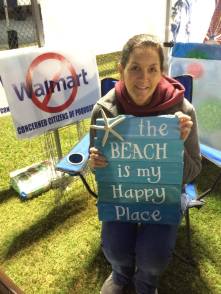